This is what I did this morning.

And what I did on Friday.

No, we are not trying to get pregnant.

No, we did not have a breech of the front lines this month or anything of that sort.

I am just on DAY 38 of a roughly 28-30 day cycle. I am regular except for a handful of times in my entire life, even then it was only a day or two. The absolute latest I ever have been was 37 days and that was my second cycle after KayTar because my body was still, ahem, getting its groove back. I've never missed a period unless I was pregnant, and I've never been pregnant and unable to get a result from a home test. In fact, I wasn't even late yet with KayTar when I found out.

And so I come to you, wise Internets, to tell me where the hell my period went without notifying me first? Because, DUDE, it is tripping me OUT.

And keep sweet KayTar in your thoughts and prayers today. We have the dreaded ABR this morning and she is showing HIGH LEVELS of doctor-phobia. On Friday when the nutritionist came to weigh and measure here, she went batshit crazy when it was time to lay down. It took the nutritionist, Josh, and me to hold her down. She's never so much as whimpered during this before. I'm a bit nervous about how today will go for her when she is already agitated. She's supposed to have GI x-rays, but I might hold off because I don't want to leave her alone in there and I don't know what to say when the technician says "Could you be pregnant?" BIG FUN! Just think of the KayTar today if you get a spare second. I hate that she is feeling so fearful right now. I'm fighting the VERY STRONG URGE not to call and cancel, because I want nothing more than to give her a reprieve. However, unfortunately, anything later than today will put us past the deadline for the Great School District/Insurance Switch of 2008. So the Brain demands I keep the appointment, even though the Heart is throwing a bit of an internal tantrum about it all. 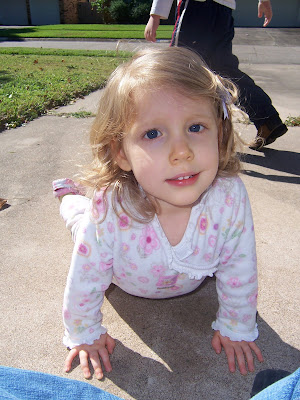 Because she's like a million times nicer to look at than a negative pee stick. ;)
Posted by Kyla at 5:57 AM

Whaaaa! I came over to coo over Bub-Tar's cleverness and find this new post. Oh my. I too am never late. This would be freaking me out. I have no answers for you other than to say that this month has been particularly stressful for you as you await diagnosis for Kay-Tar. Maybe that's what's up.

All my best wishes to Kay-Tar today.

Your sweet girl. I'll keep her in my prayers today.
And it's probably the stress thing that's making you late, although I know the fear of which you speak. Perhaps a trip the doctor for yourself is in order...

If your period is late, chances are it's because you haven't ovulated, or ovulated late. (As Mad suggested, that could easily be stress-related.) If you HAD ovulated on time, and your period didn't come because you were pregnant, then you would certainly be getting a positive result from the HPT.

So my diagnosis = not pregnant.

I too am diagnosing NOT PREGNANT. I will, however, concur with the other diagnoses of STRESSED OUT. All baby-related stuff aside, do you really want your period during all of this other drama right now anyway?

KayTar is definitely more beautiful than a pee stick, but I'll admit that I enjoy a good pee stick picture as well. :) hehe

I was straining so hard at that first picture trying to see a 2nd line. No such luck. I can't imagine where ol' Aunt Flo is hiding out. I know this has to be super frustrating for you!

Hope the doctor's appointment goes well. I'll be thinking of ya!

Oh, and another sunny day picture. That is GREAT!!!

Your darn body is playing nasty tricks on you. I think you should call your doc, personally.

And, I'm sorry KayTar's feeling agitated today. I'd be so torn too. I'm anxious to hear who won: head or heart. :)

Thinking of you guys as always.

I don't know about this late thing - it really could be stress or hormones fluctuating for some reason - and, of course, I will keep KayTar in my thoughts today - I hope it goes well for her and you. And I will keep you in my thoughts as well - take care.

Like you, my period is never late. However, there have been one or two occasions where I was feeling so stressed and anxious that my period was almost two weeks late. It's very possible that you're experiencing a similar situation.

I see the period question has been well addressed.
I am just trying organise the words screaming around in my head.
Dear woman I hope it went well today. I hope that freakout yesterday was just a fluke.
I totally freaked me out when GI asked if I might be pregnant as we were standing around the giant xray machine. I was in the same boat as you as in 'not to the best of my belief or knowledge but there is a hell of a lot going on here that I am not 100% sure about' Like you need another layer of paranoia on top of everything else.
hugs.

That last caption is too funny Kyla!

Praying little Kaytar does beautifully this morning, as does her mommy.

And speaking of little 'tars....keep us posted!

Dollars to donuts: it's the stress. I can freak myself right out of menstruating. Serious.

There's a surprising number of pee-sticks on the internets lately. They faze me not at all ;-) [although I do have to admit I like the photos of KayTar better]

It's probably just stress. It throws me off too.

I'm thinking of you and K.

AAAALLLL my best thoughts to you and KayTar today!!!!

I would freak out, too. I have no wisdom to offer, since I'm regular as a clock as well.

I'll be thinking of KayTar...

Your little one and you are in my thoughts

I don't know whether to say I am sorry or breath a sigh of relief that you are not pregnant (yet :) I hope Kay-Tar is feeling better and made it through the day ok.

Oh I'm hoping that everything went well with KayTar's appointment. I feel for both of you because I know the turmoil of emotional conflict.

By now little Kaytar is in bed resting peacefully, I hope. Did they sedate her for the ABR? Ethan has had 2 of those and I was able to nurse him to sleep for both. Since he is totally deaf he was able to sleep through the entire test.

Just checking in to see how everything went...well, I hope!

If I had a dollar for every negative pregnancy test I have taken over the years, I would have, like, eight dollars.

Actually, that doesn't sound all that impressive.

I should have just said, "Stupid late period" or something equally as profound. ;-)

i am just impressed you find the energy for sex. dude, that rocks.

Oh sweet KayTar. I hope it is okay. We need something Special Fun for her.

And good wishes for you, too.

As for that stick. GOOD GRIEF do not terrify me with images of HPTs. LOL

I NEVER ovulate. So I'm familiar with the ovulation deal. And cycles. If you have some little abdominal twinges, it might be the cyst.

I'll be thinking about KayTar, and hope it goes as well as can be expected.

Not sure about the pee-stick. I mean, clearly you've been stressed before, and it's still been like clockwork. Discuss with a doctor?

I vote for stress for making your period vamoose like that...but I might ask a gynocologist to rule anything else out.

AND good luck to you guys, even if I am a day late, I hope all went well!

oh kaytar i hope itr all went well. so many doctors would make me anxious too.

and you?!?!?! So are you excited about the possibility of a baby or just scared?

but really--it is the stress.

Heh. I love jen's comment. I'm back, and happy to be here reading you again. I say: stress.