A pair of friends

Yesterday was Josh's birthday. I know, such a bad bloggy wife am I...no birthday post for him. :( He is a quarter century now and VERY excited that he no longer has to pay the underage tax on car rentals. Oooooh!

Saturday we went out to dinner with our best friends, who happen to be married. L and I have been friends since junior high, prior to meeting Josh actually. We were both in NJHS together and band, but she was a flute and I was trombone, so we didn't really hit it off until we were in PE together and mutually avoided the whole physical part of physical education. We mostly talked about my Internet boyfriend (now Internet husband), which is totally exciting for a couple of eighth graders, as you might imagine. Josh and J have been friends since our sophomore year. We fixed them up on accident really. L was spending the day with me, J was spending the day with him, and we wanted to see each other. I remember apologizing to L, because it wasn't a set up and I felt kind of bad about forcing her to spend the day with us on a pseudo-double date. I was CERTAIN they wouldn't hit it off, and we surely were not gunning for that. But we decided to see a movie, Vampires, I believe. When we got to the rather old theater, we chose a row and walked down it. Josh stopped and sat, I stopped and sat, L stopped and sat, and then there was a seat missing. J made a big deal and said, "Fine. Don't sit by me." And walk around to sit by Josh. He was half joking and half making a big deal, I think. Then we went out to grab some Taco Bell. Oh the culinary instincts of 15 year olds! At the restaurant, if you can call it that, I sat on one side of the table next to Josh, and L sat across from me. Then J said, "If you won't sit next to me in the movies, I'm not sitting next to you now." and pulled his chair to our side of the table. It was clear this was not meant to be. And then, he showed up at her house one night that week and asked her to ice cream...and so it began. Unlikely romance, though it was.

And so we have the perfect set of couple friends, because they were born out of already solid friendships. It is really the best kind of merger. Josh has friends that are just his, I have friends that are just mine...but J and L are special because they are ours really. We enjoy them together and separately and it is lovely to see them. We were in their wedding. We've "camped" together. We see each other fairly often. We have long lists of both individual and couple memories that we've shared with them. It is always a good time.

So Saturday was no exception, we had dinner, our crew plus the two of them, then came back to our house and left the boys to play video games and put the kids to bed while we scooted off for coffee. We talked about her job, and KayTar, and BubTar, and politics, and fertility, and the school system, and the gynecologist, and the decline of American youth, and our families...we talked about everything, really. And then came back home to the boys, who were still playing video games and shouting things to each other periodically. L looked at me and said, "Can you imagine having relationships that are this superficial? Think about everything we just discussed, and here they are still perfectly content shooting and shouting at each other. Boys." I said, "I know. Did you know that when we were in the hospital, I asked Josh 'Did you tell J?' And he said 'Why would I do that?' Like it was a foreign concept." L said, "I know, remember when J's dad had cancer and he didn't think to mention it?" And yet, it works for them.

As they were leaving, I said, "Let me know when you have an open Saturday and I'll leave the kids with Josh and we'll go out." She said, "That sounds great! I can even drop J off here for the day!" Like a daycare of sorts...and I thought, really, that concept is really quite fitting for these man-children of ours. I don't think they ever quite outgrow that need to play and compete. Some men do so with sports, some with video games, some in other ways, I'm sure...but I think they all hold on to the school yard spirit of childhood. Truth be told, I kind of love that about them. 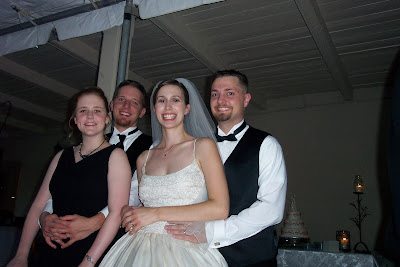 On their wedding day/
Posted by Kyla at 7:53 AM

That is such a cool story and I'm totally jealous of your best couple friendship.

that was just really nice.

and man. You are all so darn beautiful.

Yep, you are some good looking peoples.
My husband and I have no couple friends. None. Zip.

Ah! The joys of friendship!

What a perfect, balanced friendship. And you all look fantastic in that photo!

It's so relaxing when that happens...

I love this, everyone needs friends like that, and you are all so freakin' adorable.

How special! Great story, but most importantly...HAPPY BIRTHDAY to Josh!

My man plays video games, and sports, and video sports video games with his buddies. His new thing is poker, and I have to say he has done really well, so well that he hasn't been invited latley!

Anyway, happy be-lated Birthday to Josh. It's really nice that you have such a close friendship with another couple.

You are soooo pretty!
That part about the guys shooting and shouting...very funny and oh so true.

Poor Beck - I don't believe her do you? You are good looking folks and so lucky to have good friends. Take care.

We have a couple, too, who are long-standing good friends. The kind who, if Alberta and Misterpie had not hit it off, it could have been a dealbreaker. It's nice to have people you can sit around with and just be comfortable, like an old married cuople of 4.

What a lovely story. It is so nice to have great friends.

Boys, yeah. Boys. Sometimes they make it seem so easy.

Hubby and I have friends like that too, except we're the L and J - right down to the "we're not setting you up" convenience get-together, which is where it all started. It's a good, good thing, friendship like that.

Good friends are a wonderful gift, aren't they?

what a true blessing to have friends like that with that sort of history.

What a great story! You are so lucky to have friends who were there with the two of you from the beginning.

Love the picture! But you're making me feel *old*!

You are lucky to have such friends--all of you.

I would love to have 'couple friends' like that. Sounds like a wonderful relationship for all of you!!

I also stopped by your friend's place, fyi.

What an awesome friendship for both you Josh!

And happy belated b-day to Josh! And just a quaurter century old...yall are such young things!! Oh to be in my 20's again. LOL.

friendships like that are special. hold on to it. it is truly wonderful o have people like this in your life!