Last week, I had a wonderfully refreshing getaway. It felt as though I was living someone else's life for a few days. My children, even KayTar, were just fine without me. I breathed a sigh of relief. A touch of normalcy. A non-event. The art of simply existing.

Josh and my mother both noted an increase in the eye deviations, but that is nothing. A blip. They don't seem to be disruptive for her, just a bit unsettling to witness. You want to snap her back to reality, but she comes back all on her own after a few seconds. Eye deviations I can handle. Monday, she started falling again. Spontaneous falling, sudden waves of dizziness, drop attacks, whatever you'd like to call it. We aren't sure what causes it, we aren't sure what it is. It has been a while, maybe a month or two, since it has happened. Monday it started and it hasn't let up yet. She isn't perpetually falling, but it happens sporadically and without warning. I've caught her twice when it has happened, but if I'm not looking directly at her and within arms reach, there is nothing to be done. It is hard for me to explain how out of the ordinary these are. KayTar is delayed and she has an ataxic gait, stumbling and falling are expected of her, although she is incredibly cautious and steady in her movements. This is not stumbling and falling. It is not a misstep, it is not a wobbling that causes her fall. It is the blink of an eye and she is on the ground. Her reactions range from a confused query of "Okay?" to can't catch her breath hysterics. She can land in my arms or break her fall with the coffee table. She can walk away unscathed, or with a scar. 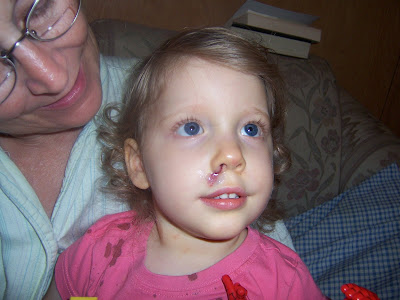 Scene from a Mother's Day Massacre

I have to impose extra restrictions during times like these; absolutely no stairs, try and keep her off of raised surfaces altogether, try and encourage sedentary activity (sadly), and keep her from walking around with objects in her hands. She doesn't quite understand why she can't do certain things. Our OT told me today that recently she received an email with a photo of one of her patients with a fork through his nose, because he had a drop attack while holding it. It takes everything in me not to order a large padded hamster wheel to keep her in until this passes. When these things began, she was largely sitting and the falling was minimal. Every day she becomes more and more active, in spite of her challenges, and it is terrifying to know she can just drop anywhere without warning. I can't really make the environment safe enough for her. Every day this week she has had a minimum of three of these falls. It doesn't sound like a lot, but when you can't control the circumstances it is too often. Tonight I was reading BubTar's bedtime story while Josh and KayTar were downstairs. I heard something and looked up and KayTar was in the doorway. I'm sure Josh only looked away for a moment or two, but there she was, upstairs unattended. Nothing happened, but it COULD have and I hate having to even think about it. I hate that she is limited by the possibilities, as well as her own body.

We never know what to expect. Episodes slow, drop attacks stop, eye movements calm down...and then a week later everything has sped back up. She's having two and three episodes in a row. She's having multiple drop attacks on a daily basis. She's having exorbitant amounts of eye activity. When things are calm, our hearts rise up hoping silently that maybe this is the end of it. Maybe she's outgrown it, served her time. Maybe the last time was truly the last time. But it isn't. We know that. Even though we know, it always comes as a surprise when it happens. The hope might be silent, but it is no less powerful. It can fill your heart so much that it soars. You find yourself so high up with nothing to cling to but those same hopes that suddenly seem so wispy and transparent. Down you go. The rise and fall isn't always quite so dramatic, though. This is our life, our hand, our sweet KayTar. There are moments that do feel like that great big plummet, but not always, not every time. Sometimes it is more like a revolving door, you're in one minute and the next you're out. Sure, it might be cold and raining outside, but one more turn of the door and you're back inside, sipping your cocoa by the fire. Sometimes I just wish I could stay there.
Posted by Kyla at 5:08 PM

Oh sweet angel girl. I wish this darn stuff would just knock it off already....

I wish you could stay there too... emxx

It's HARD, isn't it? Your poor baby girl.

I'm so sorry that everyone has to go through this, but most especially KayTar. It sounds so confusing for her. Of course it is! And the unpredictability is awful and frightening -- you've conveyed that so well in this post.

I'm just all kinds of sorry.

Of course you want to stay there. WE all want that for you, for her. Poor sweet Kaytar, my heart hurts for her.

I wish you could stay there too! SO so sorry.

These dropping episodes just add a whole new level of difficulty for all of you. I can't imagine. Wish it was possible to lock that revolving door so you could all enjoy the cocoa forever.

Oh, poor KayTar for her falls and confusion, and poor you for your up and down hopes. I'm wishing you both soft landings.

Ugh. The joy of the post blogHer posts was so, so, i don't know, freeing for me to read in your writing. And now this. That poor, wee lamb.

Gack so sorry for this frustration and for poor Kaytar with these new limitations.

oh can i help make a that big padded hamster wheel? i know that instinct to protect and shelter. and now with his falling, it need and desire to keep her safe must be overwhelming.

I say buy the darn hamster wheel...wishing it were that easy for you Kyla and Miss Kaytar. (((Hug)) As long as you realize the door is revolving and not locked you will all be okay, eventually.

I am constantly amazed at how well you are handling all this. Absolutely amazed.

She's so incredibly lucky to have you for her mom.

I saw Peter Gabriel in a hamster-wheel. It looked very fun.

Here's hoping for that cocoa soon (or perhaps some nice iced-tea, given the weather?)

I am so sorry. I will just keep thinking of you and praying that things get better for KayTar.

Your last few lines punched me right in the heart.

You are all amazing, KayTar is amazing...just look at that gorgeous girl! I just want it all better, I can't help it, I do.

Weird. I wish it would all just stop. And that you knew it was stopping. That you wouldn't even have to wonder anymore.

It's hard to feel like you have to walk on eggshells. I really hope things improve soon.

Anika is in an episode now too. Almost 2 months to the day.

Her eyes do not deviate but one will get squinty. The other day she closed her eyes and put her hands over them and asked, "It's ok if I watch the birds in my eyes." I have no idea what that is about.

What you describe from Katie sure sounds like seizure activity to me. Isn't she getting a 24 eeg soon? Seems like a seizure med on trial basis might be warranted.

Life is just not easy is it. Hoping things will settle down soon for you guys

Oh, Kyla. How difficult, to always walk around with your heart in your throat. it must feel terrible to have to restrict your girl from what you wish she could do. I hope you are right, that someday she will simply grow out of it.

Meanwhile, we don't let pumpkinpie run around with pointy things either because well, kids trip and slip. My doctor made a point of that, even without any health concerns.

I'm catching up on your posts. Your revolving door analogy is a good one. I'll be thinking of you. Hang in there.