The trip was amazing. It was so nice to get away for a weekend with friends. We were all a bit apprehensive about the cabin because we reserved it sight unseen, but it turned out to be wonderful! 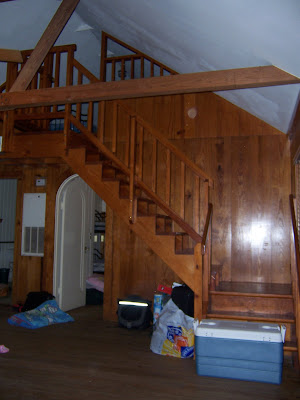 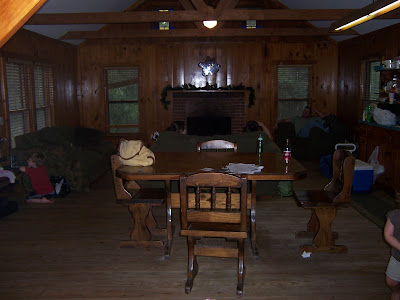 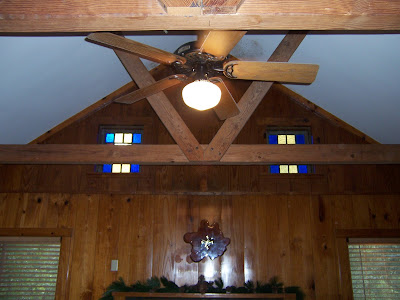 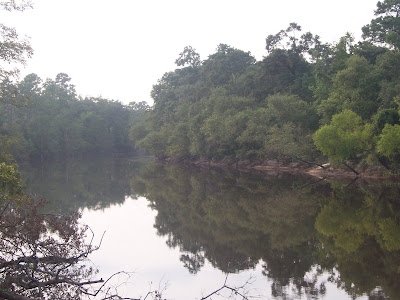 When we picked up the keys, the woman at the desk said, "There are nice group showers right down the road!" and Josh wondered why she would mention that at all. When we got to the cabin, we understood. No shower! We would, in fact, have to brave the group showers.

That evening, the men made a fire in our fire pit. Josh had brought his fire sticks and realized the reason the pack he had purchased was one dollar cheaper was that it did not come with matches. In fact, no one had brought matches or a lighter...so the boys were forced to improvise. The result of the improvisation is that we now have a Jeep cigarette lighter stuck in our Honda Civic power connector. The fire was finally started by heated a fire stick on the element of the electric stove in the cabin. 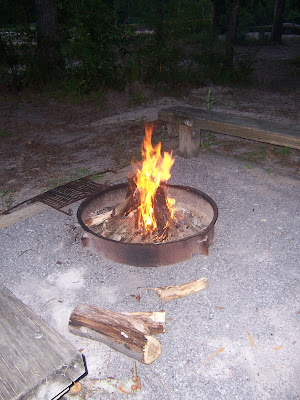 We ate a late dinner, put the kids to bed, and played board games and drank. It was so relaxing. No TV, just good conversation and company. Oh, and the drinks were classy. 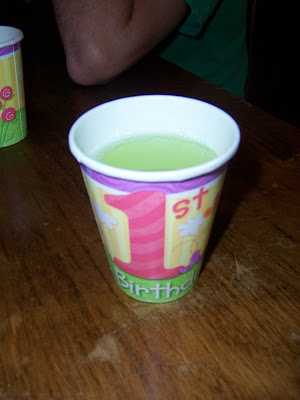 Yeah, that is cheap tequila and the Big Bucket-O-Margarita mix in one of KayTar's leftover 1st Birthday party cups. Class to the max.

The next day, the boys (and KayTar) enjoyed some networked gaming. Yes, we did not have a shower, lighter, or matches...but we did have a hub and network cables. This is what happens when you camp with techies. 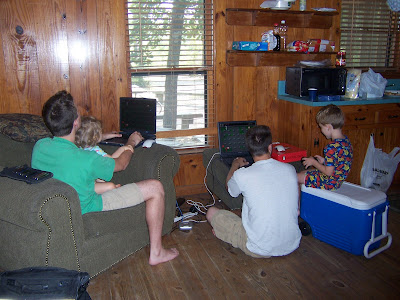 The women folk went to town for magazines and coloring books (and spinach dip) in the morning, and then we had a yummy lunch before naptime. While the kids napped, the men went and scouted the hike to the swimming hole and the women laid on the sofas and read magazines. The guys came back an hour later, drenched in sweat, but claiming it was totally doable. They said they were only that sweaty because they had walked there and back with no stops. So after naptime, we put on our swimming suits, got sunscreened and bug sprayed (natural, by the way, and it WORKED) and set out. 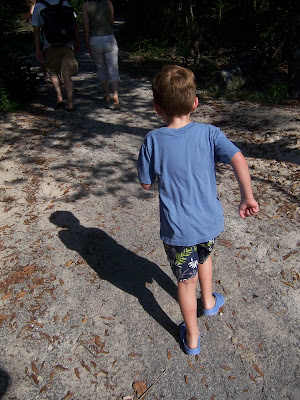 See the hopeful spring in his step? If only he knew.

Now would be a good time to tell you that we had a heat advisory in effect this weekend and that you lose a gallon of water an hour in this time of heat. Oh, and it had been raining for a few week prior to our visit. The swimming area had been closed because of the water, until Josh whined a little. I think they opened it prematurely.

So, on we blindly stumble. 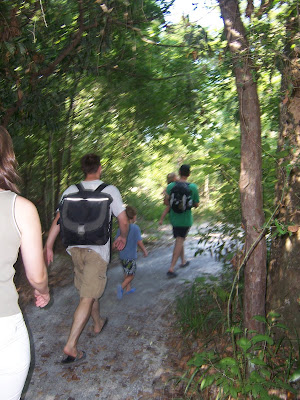 This was the last photo I took for a while. 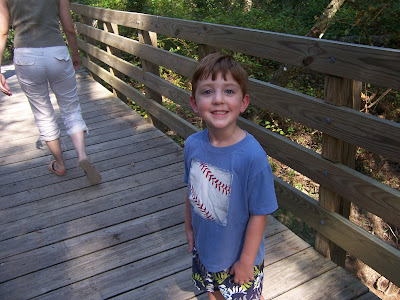 Because of the misery.

The trail was covered in sand and mud alternately. We were all wearing Crocs or flip-flops. We had to cross three stream. Josh nearly fell down and embankment with KayTar on his shoulders. BubTar was covered in sweat and getting tired fast. My shoes were full of sand. BubTar fell on the way down and embankment. We were sweating. A lot. BubTar was saying, "How much longer?" Josh was answering, "There is still a little bit to go." I knew he was lying. We passed a sign that said, ".9 miles to go." We had only been walking for .1 mile. We kept walking. By the time we got to the first rest bench, we looked like this. 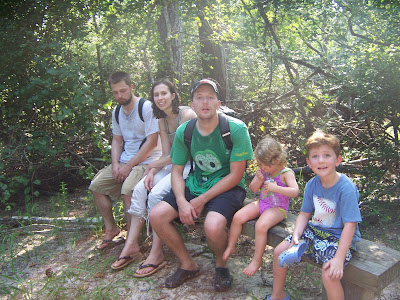 We discussed turning back. Josh claimed, "We have a bit more to go." Our friend, J, fessed up, I think it is more than a bit. We are maybe 1/3 of the way there. Maybe." KayTar looked sunburned from the heat. Josh said, "If we are talking about turning around already, we need to. It doesn't get any easier. The next FOUR crossings are more difficult." So around we turned. On the way back, we ALL fell on the embankments. Except J, he was the lucky one. L fell first. 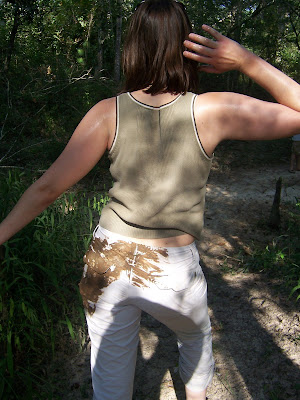 Then I fell. On large protruding tree roots. On my bum. It was inches away from being REALLY intimate with me, if you get my drift. I have a deep red and purple bruise on my bum and my tailbone hurts like hell. This is me shortly after...I was not having my bathing suit clad bum immortalized in photography, but I heard it looked spectacularly bad. 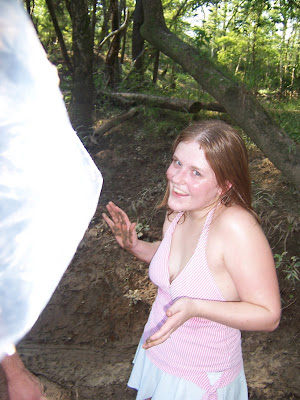 Hi! I'm Kyla! I have no idea have bad my ass will be hurting in a few hours! Or for the next three days at least.

While snapping this photo of me, L fell again. 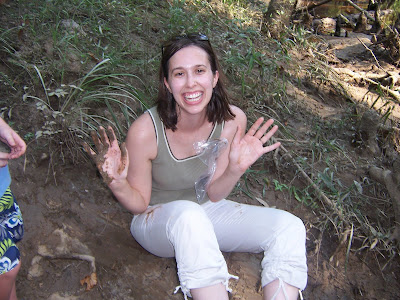 Amazing. I can't tell you how much I wish I had video clips of everyone's falls. It would be amazing. And it would possibly soothe the pain in my butt.

We were still hot. And sweaty. And now covered in mud. Awesome. 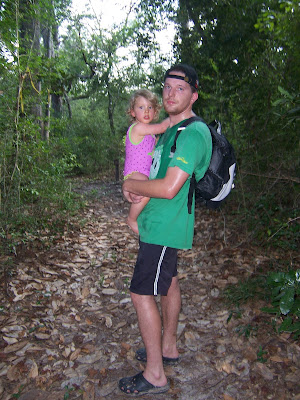 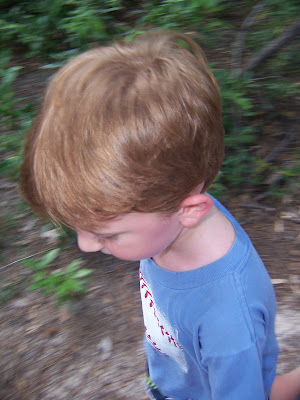 When we got back, L, KayTar, and I headed to the group showers. We realized that this was all Josh's master plan to make communal showers seem like the best thing ever. Because it was the best thing ever. And ice cold shower after that was akin to heaven itself. Even though I had to wear shoes. And keep KayTar from falling and splitting her head open. It was still heavenly. Funny how traipsing through hell lowers your ideal of heaven. But it sure did. The boys could not stop apologizing for their unrealistic expectations, and what those expectations did to my butt.

Later, once the kids were in bed, we returned to our busy drinking and playing schedule. Alcohol numbs the pain in my arse. For sure. 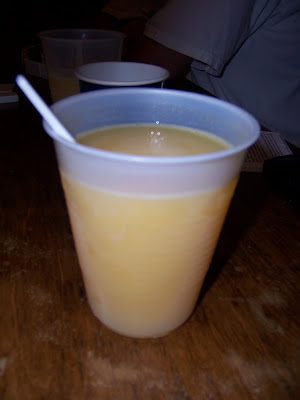 Mimosas in a plastic cups. Can we get more classy? No. Not possible.

Anyway, that was our trip. 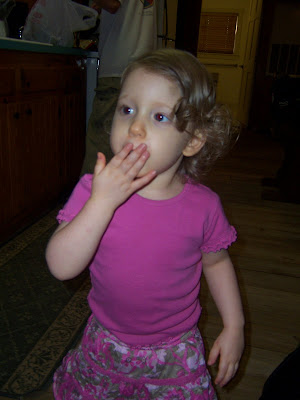 KayTar says "Thanks for looking. My mom's butt hurts really badly, so she is going to ice it now. All this sitting and typing has been a bit much for her. She'll be back tomorrow with more photos of me and my brother."

KayTar isn't kidding. I fell asleep last night with an ice pack on my rear. Best souvenir ever, right? You know you are jealous. Okay, seriously, I must go ice my tush now. See you guys later, possibly after I buy one of those lovely O-ring pillows. 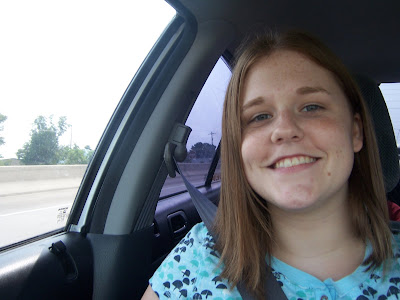 Me, before being assaulted by the stick. This is now the expression I have while imagining the comfort of an o-shaped pillow.
Posted by Kyla at 9:20 AM

Well the cabin looks awesome. Too bad the trek to the swimming was so rough!

Fix yourself one of those classy drinks and fill that O-ring pillow with icy-cold water instead of air. You deserve it.

LOL! Sorry about the swimming. And the butt pain. And the stick assault. Now I am laughing again. So sorry!

Okay, that's not like any "cabin" I'd ever seen but I'm glad you had a nice enough time drinking.

That swimming hole story and bruise...well, I'm surprised you even made it .1 miles.

Is it wrong that I think alcohol can solve any problem...? Hmmm.

This is why my idea of camping is a flat pillow and a hole in the window screen. Seriously, I used to do camping when I was a kid, but now I just can't see why I would offer myself up for mosquitoes bites, a sore back, cold water, and stinky bathrooms. You are a braver woman than I, Kyla.

And you know what? I'm jealous!! 'Cause family trips are the worst and the best, and you and your kiddos will remember this FOR-EV-AH and laugh together!!

well, at least the cabin was pretty =)

some high highs and some low lows you had there, friend.

Kyla, your story made me laugh and simultaneously wince in pain. I'm glad you rejected the trees advances and that at least the showers seemed heavenly. I'd totally consider the weekend camping (with a roof, no harm in that ;). I'm glad the bug repellent worked.

Great stories!!! I am fond of classy drinking myself. Sounds like you guys had a great time, even if you didn't make it to the swim hole. KayTar and BubTar are, as always, too cute.

...raped by nature... Katie is cracking me up with that one!

So sorry to hear of your misfortune. If it's one thing I can relate to, it's sustaining injuries in unusual ways. I hope your tooshie is better soon.

Still looks like you had a lot of fun with your friends. I'm glad for that!

You guys look like you had a grand time and the kids are too adorable as usual. :)

My fave photo? I'm sorry but this time it's inanimate (although that's a FAB series!): the margarita in the birthday cup. LOL!

Heh heh. You fell down.
But the rest of the vacation - that cabin! BOOZE! good friends! - looks wonderful. Glad you had fun.

I feel so bad because I was laughing while reading your entry. Bad me!!! You poor thing. And your poor booty.

And I didn't realize there was no showers. My type of camping has to have showers too!! LOL

Hee Hee! Too funny. So you didn't make it to the water, so what? At least you have a great story and a sore ass.

Well, except for the hike from h*ll, it sounds like you had a great trip.

Funny how traipsing through hell lowers your ideal of heaven.
Is the moral of the story don't trust the techy geeks to lead you to the beach or always bring buckets o booze to numb the pain?

What an amazing cabin!! WOW!

What a great trip. Too bad you didn't reach your destination.
Those are nice pictures.

Oh, I'm tired just thinking about it all!

Sounds exciting. Well, your trip to the swimming hole was probably not that fun, but it sure is memorable.