She was sitting at a table with a friend. They were enjoying a bit of light conversation as their children ran themselves ragged in the play area. And then we all heard it, a child shouted, "Do you want to see my UNDERWEAR?". I can only guess that this was her son, because a look of horror crossed her face as she suddenly left the table. I watched her, standing on the platform of the play structure, rapping on the window. I heard her use his full name. Uh-oh. The young boy exited the play structure and start to collapse under the weight of the trouble he surely felt coming, but the mother whispered something in his ear and he decided dramatic might not be the best way to play this one. He sat quietly by her side until play time was over for the other children.

Yeah. Totally my son. We had a playdate with Julie P. and her two little P's (who are just as fabulous as you would imagine) and BubTar decided it it was time to try his hand at comedic stripping. The child will do anything for a cheap laugh, I'm afraid. This does not bode well for the teen years. And I do hope this is the last time I find him with his pants inappropriately around his ankles. Boy, do I. Please? God? Can we make a deal on this one? Anyway, I digress. I experienced a new cool feeling on Friday; going on a first playdate with one of your amazing bloggy friends and having to follow it up with an apology email in case your son traumatized her daughter with his boxer briefs. Yes. Cool feeling, indeed. I guess he figured it was a bloggy meeting, he better give us a bloggable moment at the very least. It was his civic duty.

Later when we talked, he told me he had actually done it twice and I had only caught him once. *sigh* At least he is an honest little flasher. I appreciate that. I really do. If we can preserve that particular quality, it will make the teen years easier. Pants-dropping notwithstanding.

He's grounded from Spongebob indefinitely. We assume he picked up that little humorous bit from our friend who lives in a pineapple under the sea. We'll let him watch it again once his self-control catches up to his sense of humor...so like I told Julie, around 35, maybe? 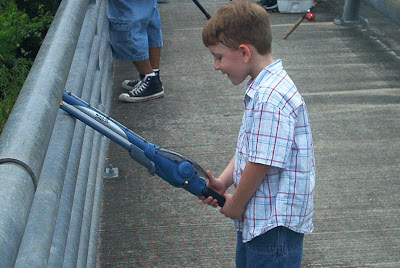 Josh took this photo, because "Heh. Look at how he's holding the fishing pole. Heh!" I guess the apple does not fall far from the tree. And I knew Josh during the teen years. God help me.
Posted by Kyla at 11:13 AM

i loved reading about this over at Julie's as well. how cool that you all got together, clothing perhaps optional. sounds like a great day.

Maybe I don't want a boy? Just kidding! I just don't get that kind of stuff from my three girls!

And spongbob, I dislike him very much. My daughters watch him, but I just can't stand that show!

Ooh, yes. I accidentally let the kids watch Spongebob once & they picked up some interesting vocabulary. They now use the word butt constantly. Thank you, Spongebob.

What a RIOT. However, I don't think you need to worry quite so much about BubTar being a bad influence. Julie, correct me if I'm wrong here, but I'm guessing the two P.'s can hold their own, no?

Hailey picked up "I'M GONNA KICK YOUR BUTT!" from Spongebob. She says it to everyone.

PS. I just told Julie...I want in on the next playdate. Flashing doesn't bother me. Plus if it gets too bad Hailey will kick his butt. Apparently.

Cracked me right up

this is totally hilarious! i bet the p's and julie were none the worse for wear!

Little BOYS. My guy has FINALLY - FINALLY - stopped wandering around with his hand in his pants all the time. Sheesh!

Okay, that was funny.

No, a lot funny. But I'm a five year old boy stuck in the body of a 34 year old woman. And I'm sure Julie didn't mind your little flasher propositioning her girls. That much.

Ha ha ha ha ha! This blog entry makes me smile...the picture Josh took... your time with the Ps and your flasher.

(A) I want everyone to know I *did not laugh, comment, or interfere.* I think the not laughing bit is key, closely followed by the not saying "oh no big deal," right?

Persistence and Patience are clothing optional kids, perfectly capable of being utter instigators and voyeurs, and anyway, Patience spent most of last week in a dress (up over her head).

I'm so used to this kind of monkey business it barely even registered for me.

But was very impressed with how low key you handle this sort of thing.

Most importantly, I am LOVING that we sound like bands for Disney:

Julie P and the Little Ps.
Kyla and the Tars

Err that was me deleting myself LOL.

Jenny next time you are IN!

But you have to come up with a band name.

LOL, you're an awesome mom Kyla! I have a little stripper too at only 9 months. I had to gently remind his daycare teacher that he has to have shorts on over his diaper or he can take his diaper off (after finding him in his crib naked. twice).

I can just see all the funny (and embarassing) situations I have to look forward to! I'm sad to say that's this behavior is not always something boys grow out of. I have a 20 year old brother that is known for being an exhibitionist. At least he's always keeping life interesting. :)

Forgot to say that the pic and Josh's commentary were hilarious. :)

Justify it by thinking "can I blog about this" - stuff like that is always a great post ;)

SB was a ham like that when he was a kid and all it took to get him straight during the teen years was a good talkin' to from his dad. There's hope Kyla, there is hope.

Is spongebob really that risque?

Yes, well you are in trouble now, arent' you?

My nephew (6) is always asking anyone and everyone "do you want to see a dance' and then stripping down.

Perhaps he and Bubtar could start a troupe?

Oh, the things I have to look forward to.

I'm laughing too hard to type.
But not AT you, you know that.

You are so lucky to have such a doll of a little boy. He is adorable and seems sweet too. I wish all boys were as well behaved as he then maybe I wouldn't be afraid of having another child.

Oh, that's nothing. We were at a playdate the other day, when suddenly, both girls had stripped off their clothes and costumes and were just running around naked. The mom said her daughter does it all the time. Oh jeez. I was wondering - it seems we could just tell Pumpkinpie that at our house we do not play naked, but then how can we ever reciprocate the playdate, if this kid always strips? Gah!