Do you know that feeling when you have a post coming, you even know the subject matter and the stories you want to tell, but the words just refuse to gel properly? They come out forced and jumbled and refuse to work with one another? And so until they can learn to work as a team they are all going to sit in edits for a time out? I'm having one of those days. Perhaps all the thinky I did yesterday zapped my brain.

KayTar has croup. She started sounding a bit husky while we were camping, but we thought it was just her being allergic to nature, like her mum. Once we got home, the huskiness morphed into coughing spells, but nothing too serious. It was the "a-hem, a-hem" type coughing so no worries. Tuesday night it evolved into the "BARK! wheeze. BARK! wheeze. BARK! VOMIT!" type cough, so I took her to the pediatrician. Croup it is. She wasn't feverish yesterday, but she is today. I had a busy weekend of playdates planned, one for BubTar on Friday, then over the weekend I was supposed to have one with Amy, and one with Julie and Jenny, too. Jenny's Hailey is very ill, moreso than KayTar, so I think between the two of them, we'll be canceling the playdate. Amy has a little baby, so we are keeping our croupiness to ourselves for sure. Does she HAVE to get sick when I have so much promising adult conversation on the horizon? It can be rescheduled, but this weekend was going to be pretty amazing. Imagine, children entertaining each other, grown ups discussing things other than the WonderPets latest rescue. Instead it will be spent steaming KayTar's lungs in the bathroom for 30 minutes at a time, cuddling on the sofa, and pushing fluids. Not too bad...especially the cuddles. 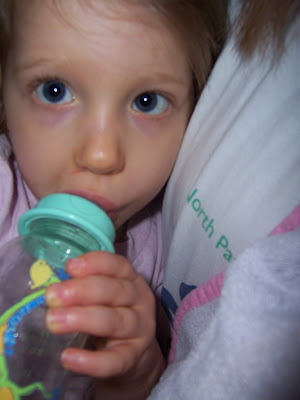 Speaking of the WonderPets, BubTar would like to know why they "always end so happy? Why can't they have a sad ending, just one time? I'm so BORED of happy endings." Boredom is the disease of being five, I think.

I made some important life-type decisions last night, but I don't feel like blogging them yet...especially because my words refuse to work as a team. I will soon, though.

Oh, and it is raining here. Just a bit. 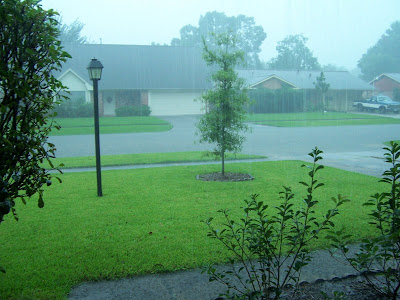 I'll be back tomorrow, hopefully with more to say and the ability to actually express it. For now, I need to turn off my machine before a power surge does it for me. ;)

Plus, a couple little cuddlers are waiting for me. 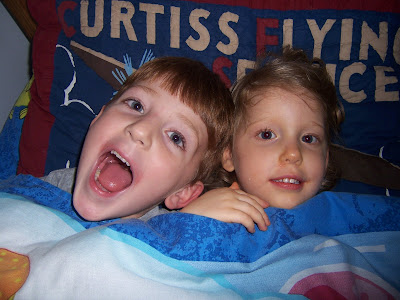 Yikes, I hope she gets better soon! (The Boy has a talent for getting sick as soon as I plan a playdate.) Hope all returns to normal soon - I'd like to hear about your life-decisions.

I wouldn't be able to resist those cuddles and cuddlers. I really hope that croup heals quickly (((hugs KayTar))).

I'm with BubTar - why are those endings always so sappy. They need an episode directed by Tarintino.

As per words not cooperating - I get that. I'm sending you positive, non-jumbled vibes, and wishes of a return to normal life.

Ooh, life decisions! I'll be eagerly awaiting the next post...

I wouldn't be able to resist that, either. Not in a month of sundays. I am waiting to be cheerleader to your word team about life decisions :)

I don't think anyone could resist those cuddles. If so, there's something wrong with them!

Hope KayTar feels better and that you guys get to join the social circuit again soon.

Any way to send some of that rain our way? The constant watering of the yard is getting very old...

Your poor baby! Croup SUCKS!
Flooding, eh? Can you send some of that rain here? WE have an out of control forest fire 15 minutes east of us and might be evacuated tonight. I'm not kidding.

I know that disjointed feeling. And I've seen croup, too. I hope KayTar feels better soon.

You may have been right about her being allergic to nature. I think allergies can set the stage for infections.

I couldn't resist those two, either...but I hope KayTar recovers quickly and you can reschedule those playdates and you find the words to express those important life decisions. (You're moving to Canada, right? Am I right? Ah, wishful thinking...)

BubTar is a boy after my own heart. I was so disappointed, after reading the original versions of stories like The Little Mermaid, to learn that they don't have happy endings. Why does every Disney film have to have a happy ending?

I'm positive you've gotten way more rain than you need. I hope you guys are safe and Kaytar is much better.

Hang in there, you.

I'm not a once in a lifetime chance.

And I do know that feeling about words not gelling quite properly.

Here to listen when you are ready to share...

Oh, poor kid. It feels so terrible when they are sick and you can't make it all better. Still, I am really horribly jealous that you get to hang with Jenny! We had one of those play-filled weekends a couple of weekends ago with parents we enjoy, and it was so great.