Well, I last left you on the edge of your seats (or so I like to imagine) waiting for the arrival of a FOURTH oxygen regulator and with KayTar's sats misbehaving at school. Since then, we regulator has arrived (though not on Thursday when I spent my whole day waiting for it...nope, I had to spend most of the following Friday waiting for it, too!) and it has been working, for the most part. We did have an issue with it losing its seal on the first day she used it at school, but KayTar got out the T-handle and shut the valve ON HER OWN! I didn't even teach her how, she just learned by watching. She called it "the axe method" because she thinks the T-handle looks like a mini-axe. What a big kid she is turning into! Since then we have been taking it off the tank after every use and putting it back on when she needs it and haven't had anymore issues (KNOCK ON WOOD!). We shouldn't have to take it off, except to refill the tank, but whatever...if it is working, I'm happy.

As far as her sats...meh. She is below the pulmonologist's cut off more often than we'd like and nearly every day in PE. The plan this week has been to put her on oxygen for 30 minutes to an hour before PE regardless of sats (as long as it doesn't put her at 100%) to give her body a break and perhaps increase its ability to meet her needs during the 30 minutes of PE. In addition, if her sats are low at her lunchtime check, we just put her on oxygen after lunch and keep her on until PE. If her sats are low in PE, then she gets oxygen at that point and keeps it on through music. So far, it does not seem to be making her sats any better DURING PE, but my hope is that giving her a body a break before/after that exertion will minimize any ill effects from it. She enjoys PE and I do think it benefits her to stretch her abilities (they encourage her to participate, but always allow her to self-modify)...this week she walked a MILE (or so she told me, 7 stamps=1 mile and she earned 7 stamps). KayTar walked a MILE! I probably would not have thought it possible and I definitely would not have allowed/asked her to push it like that in real life, but she did it (and besides her oxygen issues, she handled it well)...which is why I think there is a benefit to her participating in PE. I don't want to pull her out because of the low hanging sats, but putting her on oxygen during that madness (there are a TON of kids in PE) isn't feasible either. So for now, we're going to keep plugging along like this, tweak some things, and see how it goes. The pulmonologist might have a different plan for us when we see her in November, but we'll cross that bridge when we come to it.

It is a relief to finally have reliable equipment for her (though, I'm totally scared to try the regulator on the other 2 tanks we have because I'm afraid it will break!) and it feels good to be settling into a routine and have some rough form of a plan in place. It isn't perfect and we'll have to tweak it many times, I'm sure, but the worst part of new medical needs/new equipment is all of the unknowns. It feels like the answer to every question becomes "I don't know!" and I hate living like that. Once we get to a place where we have some idea of what direction to head and what our day to day might look like, I feel much better about it. Now we know that on most healthy days, KayTar will likely need oxygen at least part of the day, and on most sick days, KayTar will probably need oxygen most, if not all, of the day. We may not know ALL of the answers, but I can definitely settle for knowing one or two! 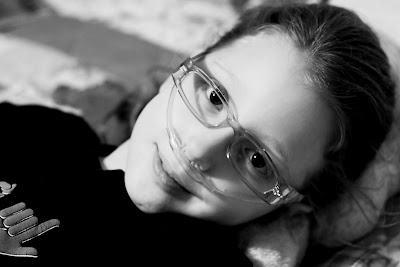 You continue to amaze me! I can't believe all the information you have to keep in your head! Glad the O2 has become more routine and that it's helping her feel good (good enough to walk a mile!).

Sometimes it's all about fitting the pieces of the puzzle together and you're definitely doing that. Super impressed that she walked 1 mile!

I'm glad to hear that the equipment is working and the oxygen is helping some. I nearly cried when you mentioned that she fixed the equipment herself! She's growing up so fast!