Last Saturday (and this Saturday, too, actually), KayTar, Josh, R (SIL/BF, or as KayTar introduced her to the doctor, "My dad's sister.") went out to dinner at Chili's (BubTar has been out of pocket every weekend since summer started, lots of sleepovers for that popular guy).

We were sitting in the booth, and Josh pulls a little sock out of his pocket and says, "I don't know what is going on with the dryer, but this is the THIRD sock I have pulled out of these shorts' pockets."

I said, "I don't really think the dryer could have done that...maybe it was a certain little someone who got bored while watching TV in our bed (which is where I lay out laundry, before putting it away)."

So Josh said, "KayTar, do you know anything about socks in my pockets?"

She started cracking up! "Yes! I did it! I was laying in your bed and I opened up your pockets and stuck me and BubTar's socks in there!" She mimed how she sneakily opened each pocket and put the socks in, which may have been the best/funniest part of the whole thing, then laughed some more.

Last night at Chili's, we had a waiter in his late teens/early twenties with bleached blonde hair sort of swooped over to the side, and when he came to take our drink orders, KayTar shouted, "OH MY GOSH, YOU ARE SOOOO..." And then everyone at the table collectively shushed her, because seriously, we never know what is going to come out of her mouth. We all laughed, including the waiter, who said something like, "Now that we've gotten that awkwardness out of the way, I guess don't have to be professional with you guys and we can all relax." As soon as he left, KayTar was sighing with dramatic swooniness over his handsomeness and suggested that R could date him. Haha! At least she knows he's out of her age-range. ;) At the end of the night, we asked her if she wanted to leave him a note on the back of the receipt, since we had kept her from shouting  about how cute he was. Here is the note.... 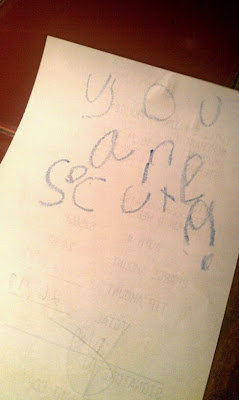 "You are so cute!"
Hopefully she outgrows this by the teen years!
Posted by Kyla at 1:09 PM

She is a crack up! I love the stories. Im also so glad you had an informative appt and hope it gives you some better direction! I can't tell you how many times I wish we did have a Dr House!!!!

What a trickster!!!
She does have a great sense of humor.

Oh my gosh, she kills me!!! I simply adore both of these stories. She is such a funny girl. Maybe she has a future as a matchmaking comedienne?