We had a great time at movie night on Friday, and I studied before and after. My mom saw my SOS on Facebook and came by and offered to help with cupcakes, but we told her was had it under control. (I'm lucky to have great family support nearby.) After movie night, Josh baked the cupcakes while I was studying...we made it to bed about midnight.

On Saturday morning, I went to class (and stayed for the whole thing for the first time in weeks! it was actually pretty nice to just sit and write copious notes for a few hours! i also answered a couple of questions during lecture that the professor couldn't answer...one about the surgical treatment for GERD and one about congenital hearing loss from rubella/TORCH infections, nice!). After the lunch break, we had our lab exam, which I ROCKED in spite of not being in lab for any of this material.

After class, I swung by Starbuck for a frappaccino, then I headed to home where I busted my butt prepping for the party. The boys stopped by the store on their way home and I picked up KayTar from my mom's house (see? family support.) We finished up the last few preparations and it was party time! It went really well, the boys had a blast. Video games, playing in the yard, jumping on the trampoline...all kinds of fun. It was the first sleepover for all of the boys except for BubTar's best friend, who has stayed here about a million times and surprisingly, they all made it through the night without incident. We had two Wiis set up in the living room and they played and played. Then at about 10pm we had them get their jammies on and rented a movie. It went better than we could have expected. We didn't go to bed until after midnight and we were up at 5:20, but everyone slept through the night. Josh made a donut run earlier this morning and 3/5 of them are still here at 9 this morning, playing happily. KayTar just got home from her sleepover at my parents' house, too. The only thing left to take care of this weekend is my project for class, and I predict it will be pretty easy to knock out!

Here's a few of the photographic highlights... 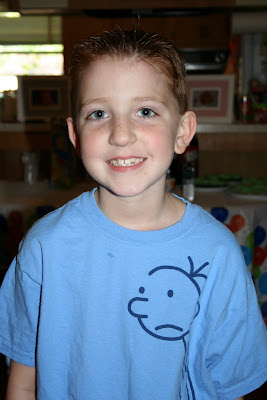 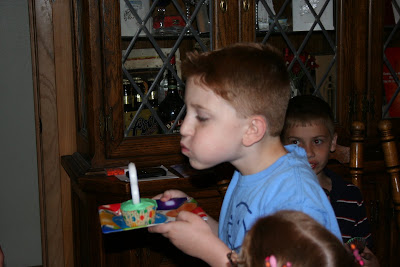 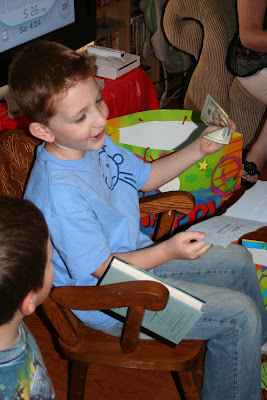 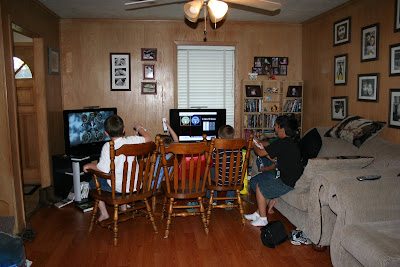 Another win! I don't know how you do it!

Look at that glowy birthday face!

Happy next year to all of you.

Bub is looking so grown up and handsome. And I'm just super impressed that his party went off without a hitch. A 2 hour party is one thing, but an overnight sleepover?! You guys are rock stars!

Happy birthday, Bubtar!! What a great weekend for you. While it's fantastic that your mom responds to FB status, I'm secretly praying that mine never shows interest in FB. She already reads my blog (and my Twitter feed posted there), and that's plenty.

Congrats on rocking your busy weekend!