1. KayTar is still sick...actually she is sickER. Yesterday she really seemed to be making great strides, her fever had been gone for a whole day, we were working back up to Pediasure feeds, and then the bottom just fell out. I had a Chem exam, so Josh took the kids to scouts as usual. KayTar seemed like she could handle it, we were even thinking about her returning to school today. I finished my test quite early and called Josh to see if I needed to get her, but he said she was okay. I stopped by Subway to order a sandwich and as I pulled into our garage, Josh called back and said she was coughing non-stop and asked me to come get her. As soon as we turned back onto our street, KayTar said, "I'm going to throw up!" I said, "Not yet! Think about something out. Hey, what about BUTTERFLIES?" It actually bought a minute or so, but by the time I unbuckled her, she puked all over the garage floor. Then in a bucket in the garage. Then in the bowl we RAN to as soon as we entered the house. There was A LOT of puke. Her cough is just terrible now and her fever spiked up past 102, higher than it ever was on the front end of this. Tomorrow we're going to the pediatrician, in case she needs a round of steroids to kick this, after 5 days we want her getting better not worse! The good news is that we're staying on top of her ketosis and hypoglycemia and giving her that 2:30am feed is really helping.

2. BubTar won the ENTIRE district Pinewood Derby for scouts! He came in first place for the Wolves, but he also beat EVERYONE in the whole Derby, all levels! He was beyond excited. Now he gets to compete at Scout Fair! KayTar was at home sick again, but they raced for her and she won 3rd place in the non-scout race! The 'Tars make some awesone racing machines! 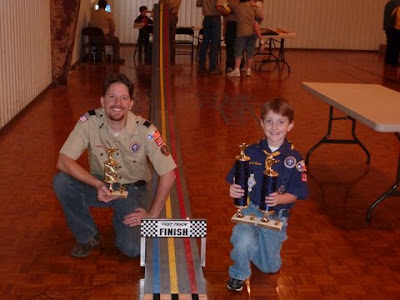 3. BubTar's surgical consult went well last week. He doesn't need surgery at this time and the belly tenderness was non-existent at that check. Hopefully, whatever is was will NOT happen again!
Posted by Kyla at 5:32 PM

congrats to bubtar and here's praying he stays healthy.

and prayers for kaytar to get and stay healthy

Glad that Bubtar is doing okay, but man, poor Kaytar.

Here's hoping she is feeling back to herself in no time. Poor kid.

I'm kind of shocked BubTar's symptoms disappeared like that, but it's certainly a wonderful thing! And I'm super proud of him for winning the Derby!

I hate that KayTar had such a rough day. :( Sending hugs!