We don't go out to eat with the kids much. We might go to a family friendly restaurant 2-4 times in a calendar year. We generally prefer restaurants with an outside deck and play area, so KayTar isn't stuck at the table with us. Taking a food hater with a variety of sensory issues out to a noisy crowded restaurant to watch people eat can be problematic, so imagine my surprise when KayTar became exceedingly excited while passing an IHOP restaurant earlier in the week. "There is an IHOP! IHOP is my favorite restaurant!" I asked her, "Do you know what kind of food they have there?" She said no and I told her, "Bacon and sausage and toast!" which are all things on her acceptable list. This information sent her over the moon! I told Josh about it and we decided to give it a shot. KayTar has been looking forward to it all week and surprisingly, it was a success!

She told the server (who we happened to know) that we needed a table for four and when he asked is a booth would be alright, she said, with a bit an attitude, "Oh, I guess that will be fine." When it was time to order, she settled on a Dr. Pepper and a side of bacon (she specified "the tall kind" so she didn't end up with bacon bits). 2 pieces. She waited patiently for her food. She used the syrup (which she likes to pronounce "SY-rup") as a puppet and asked everyone at the table questions, for example, "Hi, my name is Syrup! Do you want to eat me?". She ate both pieces of bacon and then ordered two more, which she also ate. She was delightful and well-mannered, minus one small screaming outburst when she realized I had borrowed her fork without permission (in my defense, I thought it was Josh's fork). The highlight was that we went out to dinner and she ATE. Miracles do happen.

She's been eating well (for her) lately. This morning she had a sausage patty and a small powdered sugar donut for breakfast. At lunchtime, she had a serving of chips. For dinner, she had the four pieces of bacon at IHOP. The foods she will accept on a semi-regular basis are:

It isn't a huge list or a healthy list, but it is a massive improvement. In addition to the expanded list, she is also accepting the foods on a more regular basis. Usually her school lunch consists of one the meats she likes, either chips or bread, and a baby food veggie. She usually eats a pretty good percentage of the food I send. She still isn't approaching anything near a typical four year old's eating schedule or diet, but she has been making steady progress. She still needs 3 tube feeds on an average eating day and 4 on a day she doesn't take anything by mouth, but she is enjoying the food she does eat a little bit more, I think. Most days she asks for a snack at least once, that in and of itself is significant. She's had many ups and downs in her sordid history with food, so I know this may or may not be a lasting improvement, but we're still glad to see her relationship with food evolving towards something that might one day be pleasant. For now, though, she has the freedom to eat what she wants when she wants it, and she is still getting all of the nutrients she needs. It is ideal and we could not be happier to see her thriving from the steady nutrition and also utilizing the freedom to explore the joys of eating at her own pace. 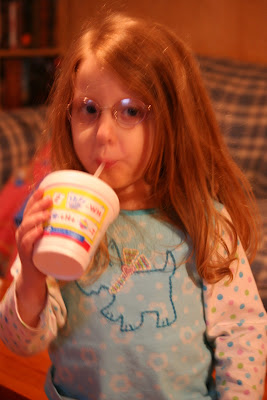 i personally have never been to an IHOP - i know, i'm pitiful - but i think i would love to have dinner there with KayTar.

and i'm so glad you guys had a good time, and it was a positive experience, and she's eating more.

I just commented on this over on FB, but I hope you got some of that yummy stuffed french toast. I haven't been able to get it out of my mind since I had it a couple of weekends ago. So good!

I'm actually impresesd at the list of foods she is eating...I didn't realize she had added so many new things.

It's wonderful that eating is becoming a pleasant experience for her...and restaurant dining too! I see a lot more dinner dates in your future!

I'm fascinated that something that could be seen as so extreme (the g-tube) and that was cause for such deliberation is turning out to be such a blessing for KayTar. It really is giving her freedom. It's taking away the stress that used to be involved with food and eating. So exciting for your family!

Very exciting! She sounds like my husband - he LOVES bacon :)

I hope that list keeps expanding and she finds new foods to enjoy!

Because of our situation over here lately this post made me teary. So happy for her wonderful progress. Glad she enjoyed IHOP. Ben loves Bacon too. Practically the only food he is guaranteed to eat. Well, if it's crispy, not chewy. :)

I too am so thankful that the decision to go with the feeding tube has taken so much stress off of you. What an answer to prayer.

that is so much more than the chicken nuggets! She is doing so well honey

Is KayTar gaining weight since the g-tube was put in?

Oh that is great to hear! What a big girl going out to dinner! I agree with AJ, that stuffed french toast is amazing!!

I had to LOL about the cold pizza.

What *is* it about bacon?

I think KT's food list looks pretty good; she eats way more meat than my five year old who is basically a dairy-loving, carb-loading veg. I hope her eating does continue to improve, so that you have one less stressor with which to deal.

Yay for KayTar. What a huge relief for you! Her struggles have been your anxieties.

WOW! WOW! WOW! I think that is a HUUUUGE improvement! WOW! That is AWESOME!
09' is turning out to be an AWESOME well deserved year!!!! YEAHHHHHHH!

It is funny how much little kids seem to love bacon. I think that Kay-Tar might eat more than Jack Jack, but we were excited to see him finally get over 30 pounds just recently. He is a baconator as well.

Go KayTar! My kids love iHOP too. It's just one of those magical kid type spots I suppose.

We struggle with food all the time with our son, but hearing your stories, it really puts it all into perspective. Even though the Asperger's makes food a challange, at least we can get him to eat regularly.

Good luck, and congrats on the impressive progress so far!

Wow, she really is improving! That's such great news! We call Ethan the baconator as well. He is an addict!

That list seems plenty long for any picky pre-schooler...and from what I gather, it is extra impressive progress at your house. And IHOP, oh IHOP, who couldn't love that place? We have friends who went the g-tube route and it turned out to be the best decision ever for them. Hope it continues to work well for your family too:)!

Kyla am so happy to read this fantastic news.

Amazing! Wow! That's great ... especially about the two servings of bacon. I'll have to tell Pynchon about that. Munchkin is always trying to steal his bacon.

My 2nd would concur, there is nothing better than IHOP bacon!

And...is that a Sonic cup she's drinking from? If so, lucky girl...I have to drive 2 HOURS to the nearest Sonic!

I loved reading this, Gigi does so many of the same things (puppet syrup, attitude) and with pizza Gi's has to go in the freezer too.

I'm glad you guys had a rockin' iHOP visit.

Reading this post and the last one together and it is just AMAZING how far she has come since the tube went in this past fall. She's an entirely different child.

Using the SY-rup dispenser as a puppet is genius, I say!

Barring the jarred baby peas, Kaytar and I love THE SAME THINGS.

I'm glad there's some light - I hope that she has many happy eating occasions ahead soon!

LOL on the 'tall' bacon!

She has come so far. Every new food is progress, right?

that is great! I love me some IHOP too! I love that she had a little bit of attitude about the booth. Classic!

It is such a 'wahoooo!' moment when kids like her and my son try a new food! Braeden at age 8 still has a very limited repertoire of foods, but now and then he'll eat something new, love it, and we can add it to the list of non-barf producing options. :) I so hear you Kyla, and I'm so happy you all got to enjoy a meal at IHOP! We managed a Red Robin lunch with grandparents last Friday, that was the least stress inducing restaurant meal we've had in.... ages. Braeden didn't eat a lot, but he did eat. He gagged over Papa's very offensive celery (lol!) but didn't actually barf. It is SO stressful to sit with him and hope that I won't be holding an empty glass up to his mouth to catch barf.