Glad that is over!

Yesterday was a much better day. Shortly after I posted, they rechecked her glucose and it was up to 103! Woohoo! She slept until 10:30 or so, and when she woke up she was back to her happy, chatty self. It was awesome. She tolerated all of her morning feeds, a total of 2 ounces of Pedialyte and 6 ounces of Pediasure. She snacked on a breakfast sausage patty while we watched cartoons together. It was such a relief. 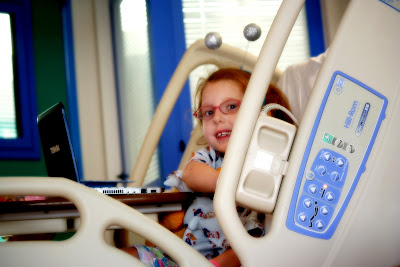 Results from her critical labs started to come in, and all of the ones they had yesterday were normal, except for her cortisol, which was 7 when it should have been 18. Because of this, they ordered an ACTH stimulation test so we had to hang around longer than expected. It was fine, though, because KayTar was feeling so much better, and the hospital is much easier to tolerate if your kid is happy and well. The results of this ACTH stimulation test were normal, just like the one she had done in June. It sounded like the doctors were discounting the considerably low cortisol as being important because of the results of the ACTH stimulation test, but I disagree with that. If her cortisol was low when she her body was under stress and hypoglycemic, I don't really think it should be dismissed as unimportant. When she is healthy and not expending large amounts of energy, she is fine (as proven by the fact it took her 31 hours to become hypoglycemic at rest), she has problems when her body is stressed by increased metabolic demand or illnesses and her body doesn't rise to the occasion and appropriately mobilize resources. It seems related to me...of course, I'm not an endocrinologist, so who knows. (If you ARE an endocrinologist and you are reading this and can explain it satisfactorily, feel free to do so. If it unrelated, I'd really like to understand why that is. The doctors were not doing a good job of explaining it away.) 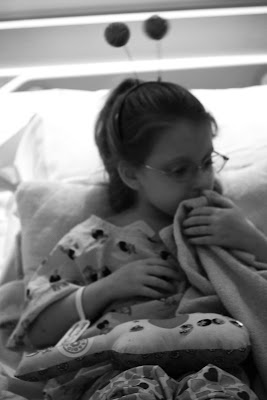 There are our discharge orders:


1. Add 1 tbsp of cornstarch to morning g-tube feed.
2. Check blood glucose in morning and prior to lunch feed for 4-6, can discontinue checks when glucose is consistently above 80.
3. If glucose is less than 60 for 2 checks, call emergency/go to ER.

#1 is awesome. Cornstarch is a very complex carbohydrate, so it is suppose to help get her to lunch without her glucose dropping like it has been.

#2 is no problem, we don't mind glucose checks...except, she RARELY has numbers above 80, which I don't think they full understand. Since school began, she's only had 5 numbers over 80. I'd like to make sure they know her numbers tend to stay in the 60s and 70s for the most part.

#3 is a little ridiculous. She'd have been in the ER twice in the last couple of weeks based on this, and we've been able to correct her deficit at home rather easily. It seems unnecessary to take her in for that every time. Of course, if we can't correct the deficit, we'd take her in.

I have to call them on Monday to get our follow-up appointment time, so I'll get some clarification then hopefully. That's that. We're home now and so happy to be here! 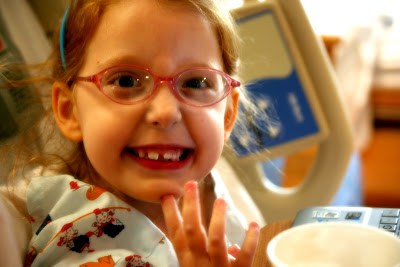 I've been following your blog for a few weeks now, and let me tell you.. I'm praying for y'all! I'm a pre-med.. but believe that God can ease all this pain and suffering! :) You are so blessed to have such wonderful children! Good luck studying at late hours.. it's always rough for me!

Glad you are home! I am always so impressed at your record keeping and research. I hope that her MDs realize what an amazing resource they have in you, and listen to what you say!

I'm with Kaytar, my levels tend to stay below 80 in the am too.

I'm glad the tests are behind you--I imagine you won't have to do this again, will you? It sounds like the results were similar from the last one...no answers for you, but I hope you get some soon!

you are a rockstar
seriously why would you go in if you can manage things at home? and why at 80 if she is usally 60 or 70
drs annoy me.

Oh I hope this isn't all for nothing....And I do hope the addition to her morning feeds does the trick.

It does my heart good to see KayTar smiling so big!

I hope the corn starch will make a difference. Frustrating that the doctors don't even know how to explain things well. We experienced that with Titus's big scare...not too comforting to say the least.

Just because the response to ACTH is intact doesn't mean the stimulation of ACTH release is intact, it just means that the difficulty could be higher up the chain of hormone synthesis i.e. hypopituitarism.

Medstudentitis: Thank you! I've been thinking this exact same thing and plan on asking the endocrinologist about it. It makes me feel better to have someone else mention it.